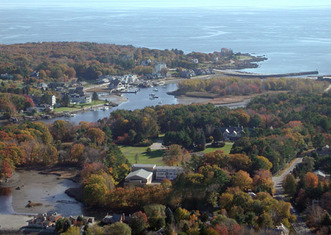 The town developed as a trading and, later, shipbuilding and shipping center with light manufacturing and it was the part of the town of Wells until 1820. Today, the town is more popular as a summer tourist destination than a residential area.

Kennebunk contains the fine examples of early architecture and among them the most noted one is a Wedding Cake house- a historic house built in 1825 by shipbuilder George W. Bourne. Similarly, the Brick Store Museum has preserved the heritage of the Kennebunks through its collections, preservation, interpretation, and exhibition of its material culture. The Brick Store Museum’s buildings themselves comprise the oldest commercial block in Kennebunk, with structures dating from 1810 to 1860, and the Museum’s collections include objects ranging from 19th-century paintings to shipbuilding tools, from 18th-century clothing to contemporary art.

With just around 10,798 residents (2010 census), Kennebunk may be a small town but it does not mean that there are not bunch of great sites to explore and activities to do in Kennebunk . You can enjoy surfing, boating, swimming, sailing and many other water activities in the beaches. Browse the charming shops, galleries and antique stores. Cruise out of Cape Porpoise on a working lobster boat. Relax on the sandy beaches, enjoying the sunbath and the spectacular views of the deep blue Atlantic.
From the early architectures to classic New England character and from the stunning area beaches to small-town village vibe, Kennebunk has something special to appeal to its every visitor.