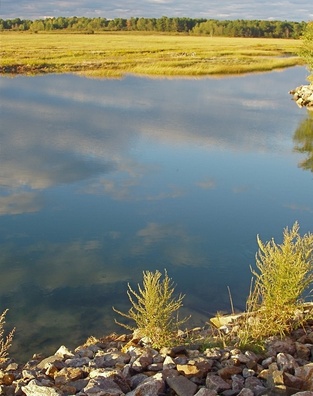 A short 5.5 miles southwest of South Portland lay the graceful marshlands and stunning seashores of Scarborough.
Enjoy miles of sandy beaches while taking care not to disturb the nesting areas of the endangered Piping Plover. Dogs are welcome at most beaches, but be sure to plan ahead and review the rules here.

"Make a date with nature" at the largest tidal marsh in Maine. Encompassing over 3,000 acres, the marsh is a haven for a variety of wildlife, flora and fauna. For a unique outdoor experience, pick up a handy guidebook and rent a canoe or kayak at the Scarborough Marsh Nature Center on Pine Point Road and travel the quiet waterways of the marsh. The Nature Center offers visitors a chance to explore this fascinating ecosystem by land or water, with both guided and self-guided tours.

Travel along the dramatic peninsula of Prout's Neck to view homes designed by famed architect John Calvin Stevens. Take time to view the stunning seascapes, from the waves lapping the sandy beach to spraying along the rocky cliffs. Perhaps it will inspire you to create great works of art – as it did painter Winslow Homer.

Scarborough also offers lots of shopping, a variety of dining and lodging options along with scenic golf courses.
History
Scarborough was incorporated in the middle 1600’s. The Scarborough Historical Society obtained a copy from the archives in Boston of the “Records of the Governor and Company of the Massachusetts Bay in New England, Vol. IV – Part 1 1650 – 1660.” A number of our early settlers “engaged themselves to this authority of the Massachusetts, at the date hereof, July 13, 1658. Whereas the tounes of Black Point, Blew Point, Spurwincke, and Casco Bay (Spurwincke and Casco Bay became the town of “Falmouth” in this order) have acknowledged themselves subject to the government of the Massachusetts, as by the subscriptions under theire hands doth appeare, wee, the commissioners of the Generall Court of the Massachusetts, doe actually graunt as followeth.” The order continued to established both the towns of Scarborough and Falmouth (now Cape Elizabeth) and was signed and sealed by the commissioners of the “Generall Court” on “July the 14, 1658.” This is the excerpt from the order on the Incorporation of the Town of Scarborough:

“That those places that were formerly called Blacke Pojnt, Blew Point, Stratton’s Islands, thereto adjacent, shall henceforth be called by ye name of Scarborough, the bounds of which toune on the westerne side begineth where the toune of Saco endeth, & so doth runne along on the westerne side of the River of Spurwinke, eight miles back into the country.”

The settlement of Scarborough was one of the earliest made on the New England coast. John Jocelyn, writer, botanist and English nobleman, came to Scarborough in 1663 to visit his brother Henry Jocelyn, who had settled on Prout’s Neck. His visit lasted eight years. His writings offer the best history of that time. He wrote that the province of Maine had plenty of magistrates, husbandmen and planters, but very few skilled craftsmen.

In the early 1600’s, John Stratton had his trading post upon the island off Scarborough’s shore, which still bears his name. This island also saw many of the other first settlers. In the 1630’s, the first settlement of Black Point was the 1500-acre Cammock’s land grant; by 1650 there were 50 homes. This grant is now known as Prout’s Neck.

The country between the Saco and the Spurwink rivers was originally called Black Point. Just when the narrow tongue of land now known as Pine Point was first called Blue Point and/or Pine Point is uncertain, but it is said that the spruce trees covering the eastern shore of the Nonesuch River appeared black to ships, and the hardwood on the western shores of the Nonesuch and Dunstan Rivers appeared blue. In 1636, Richard Foxwell built his homestead a little south of where Mill Creek (Foxwell’s Brook) saunters into Dunstan River. Henry Watts built nearby the same year. This began the second settlement.

The third principal settlement of the old Scarborough was Dunstan in 1651. Andrew and Arthur Alger purchased more than one thousand acres from Uphannum, daughter of Wackwarreska, Sagamore of Owascoag County. Owascoag was the Indian name for Scarborough, meaning “place of much grass.”

The town incorporated in 1658 and was named for Scarborough, England. It included those lands formerly called Black Point, Blue Point, and Stratton’s Island and extended back eight miles from the sea. These boundaries have changed almost every century.

By October, 1676 Scarborough, a town with three settlements of more than 100 houses and 1,000 head of cattle, had been destroyed -- some of its people killed and others taken captive by Native Americans. These settlers tried repeatedly to rebuild but peace was impossible. In 1690, the town was abandoned due to Native American uprisings, with inhabitants going to Portsmouth and other settlements further south.

The second settlement of Scarborough is regarded as dating to 1702. A fort was erected on the western shore of Garrison Cove, Prout's Neck. Other stockades were at Spurwink and Blue Point. The Hunnewell House was known as the “outpost for the defense of Black Point.” Richard Hunnewell, and eighteen other men were killed in 1703 at Massacre Pond. This incident took place after peace negotiations had been made.